View basket “Reflections by Graham Greene” has been added to your basket.

‘Zeppelin Nights is social history at its best? White creates a vivid picture of a city changed forever by war’ The Times

2018 marks the centenary of the end of the First World War. In those four decisive years, London was irrevocably changed. Soldiers passed through the capital on their way to the front and wounded men were brought back to be treated in London’s hospitals. At night, London plunged into darkness for fear of Zeppelins that raided the city. Meanwhile, women escaped the drudgery of domestic service to work as munitionettes. Full employment put money into the pockets of the poor for the first time. Self-appointed moral guardians seize the chance to clamp down on drink, frivolous entertainment and licentious behaviour.

Even against a war-torn landscape, Londoners were determined to get on with their lives, firmly resolved not to let Germans or puritans spoil their enjoyment. Peopled with patriots and pacifists, clergymen and thieves, bluestockings and prostitutes, Jerry White’s magnificent panorama reveals a battle-scarred yet dynamic, flourishing city.

‘Jerry White’s name on a title page is a guarantee of a lively, compassionate book full of striking incidents and memorable images? This is a fast-paced social history that never stumbles? A well-orchestrated polyphony of voices that brings history alive’ Guardian 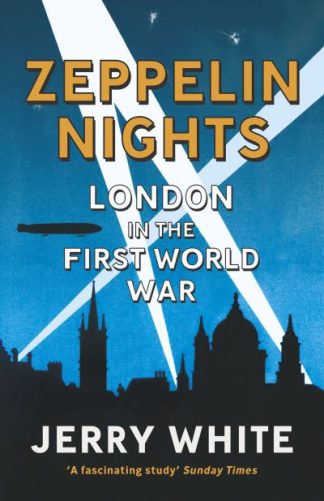 You're viewing: Zeppelin Nights: London in the First World War by Jerry White £10.99
Add to basket