Year Of The Mad King by Antony Sher

A fascinating insider account of researching, rehearsing and performing the part of King Lear for a major Royal Shakespeare Company production, Antony Sher’s Year of the Mad King won the 2019 Theatre Book Prize awarded by the Society for Theatre Research.

In 1982, rising actor Antony Sher played the Fool to Michael Gambon’s King in the Royal Shakespeare Company’s production of King Lear. Shortly after, he came back to Stratford to play Richard III – a breakthrough performance that would transform his career, winning him the Olivier and Evening Standard Awards for Best Actor. Sher’s record of the making of this historic theatrical event, Year of the King, has become a classic of theatre writing, a unique insight into the creation of a landmark Shakespearean performance.

More than thirty years later, Antony Sher returned to Lear, this time in the title role, for the 2016 RSC production directed by Gregory Doran. Sher’s performance was acclaimed by the Telegraph as ‘a crowning achievement in a major career’, and the show transferred from Stratford to London’s Barbican. Once again, he kept a diary, capturing every step of his personal and creative journey to opening night.

Year of the Mad King: The Lear Diaries is Sher’s account of researching, rehearsing and performing what is arguably Shakespeare’s most challenging role, known as the Everest of Acting. His strikingly honest, illuminating and witty commentary provides an intimate, first-hand look at the development of his Lear and of the production as a whole. Also included is a selection of his paintings and sketches, many reproduced in full colour.

Like his Year of the King and Year of the Fat Knight: The Falstaff Diaries, this book, Year of the Mad King, offers a fascinating perspective on the process of one of the greatest Shakespearean actors of his generation.

‘An inspirational joy… It lays bare the art of the actor in such an accessible, enjoyable way’ Daisy Bowie-Sell, Judge of the 2019 Theatre Book Prize, on Year of the Mad King

‘Antony Sher’s insider journal is a brilliant exploded view of a great actor at work – modest and gifted, self-centred and selfless – a genius capable of transporting us backstage’ Craig Raine, The Spectator (Books of the Year) on Year of the Fat Knight 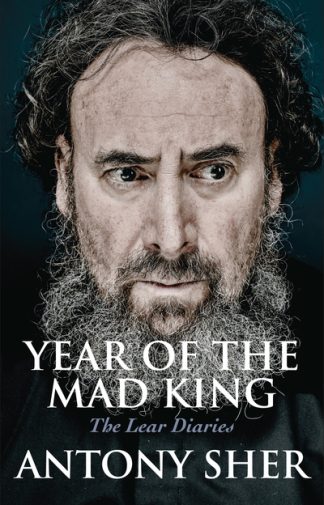 You're viewing: Year Of The Mad King by Antony Sher £16.99
Add to basket