Whale In Paris by Daniel Presley

Ever since the Germans became the unwelcome ‘guests’ of Paris in the early days of World War II, Papa and Chantal have gone out in the evenings to fish in the Seine. Tonight Chantal is hoping for a salmon, but instead she spies something much more special: a whale! Though small (for a whale) and lost, he seems friendly. Chantal soon opens her heart to the loveable creature and names him Franklin, after the American president who must surely be sending troops to rescue her country. Yet Franklin is in danger: The Parisians are starving and would love to eat him, and the Nazis want to capture him as a gift to Hitler. In a desperate bid to liberate themselves and their city, Chantal and Franklin embark on a dangerous voyage. But can one small girl manage to return a whale to the ocean and reunite him with his parents? And will she ever see her own family again? 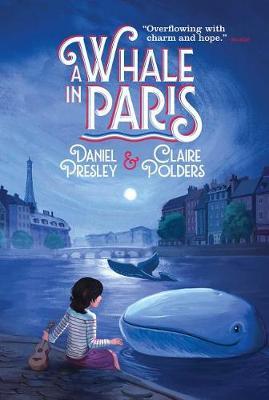 You're viewing: Whale In Paris by Daniel Presley £6.99
Add to basket
Join the waiting list We will inform you when the product arrives in stock. Please leave your valid email address below.