Tunbridge Wells in the Great War by Stephen Wynn

Using original material and letters from the First World War, this captivating and eye-opening account uncovers the unnerving realities of the First World War and the impact it had on the town of Tunbridge Wells. It looks at world events, which ultimately determined the outbreak of the war, and how these same events affected the small town in Kent and the people who made up the community. – – From an early stage the hostilities of the war became very real for the people of Tunbridge Wells. Because of its geographical location, close proximity to major ports and rail links, the town became the headquarters of the nations Territorial Army, which brought with it 5,000 troops from all over the country. – – Out of nearly 3,000 people from Tunbridge Wells who enlisted in the military between 1914-1918, a staggering 801 did not return, and out of those who did, many suffered terrible wounds and injuries, both physically and mentally. – – Many moving stories are illustrated throughout, such as that of Private William Starks Vidler of the Royal Marines Light Infantry who became the town’s first casualty of the war when his ship, HMS Amphion struck a mine and sunk. Ironically, eighteen others who died in the disaster were German sailors who had been rescued by the Amphion when their ship was sunk by the British Royal Navy. – – The book looks at letters sent from husbands and sons, who had seen action in the war, and how they were received by families on the Home Front, who were anxiously waiting for new of their loved ones. It documents the triumphs and tragedies of Tunbridge Wells’ people as they sought to find normality amongst a reality far removed from anything they had ever known before. 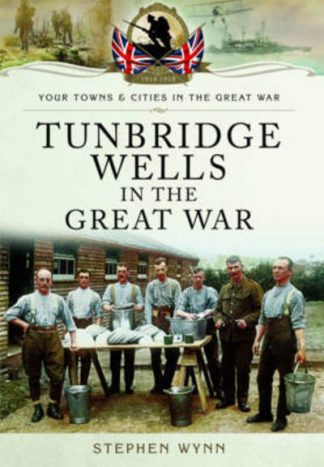 You're viewing: Tunbridge Wells in the Great War by Stephen Wynn £12.99
Add to basket