The Story of Brexit by Jason Hazeley

Whether Brexit makes you laugh or cry Ladybird’s The Story of Brexit will just make you laugh __________________________________ “Leaving was the will of the people” sighs Angelica’s father. He voted to leave. Angelica voted to remain but she feels the same way. “It is the will of the people she sighs. They stare at the ducks. They like the ducks. Ducks are better than people.’ __________________________________ ‘Brexit gave us lots of exciting new words like brextremist remoaner bremoaner remaybe breprehensible remaintenance brexorcist remaidstone brex-girlfriend remange brextortion remayhem and bregret. The new words make it harder for foreigners to understand what we are saying. In a tough new international business world small advantages such as this can be crucial.’ __________________________________ This delightful book is the latest in the series of Ladybird books which have been specially planned to help grown-ups with the world about them. The large clear script the careful choice of words the frequent repetition and the thoughtful matching of text with pictures all enable grown-ups to think they have taught themselves to cope. Featuring original Ladybird artwork alongside brilliantly funny brand new text. ‘Hilarious’ Stylist
9780571339136At last the definitive book about perhaps the best cabin crew dramedy ever filmed: View From the Top starring Gwyneth Paltrow. In Ayoade on Top Richard Ayoade perhaps one of the most ‘insubstantial’ people of our age takes us on a journey from Peckham to Paris by way of Nevada and other places we don’t care about. It’s a journey deep within in a way that’s respectful and non-invasive; a journey for which we will all pay a heavy price even if you’ve waited for the smaller paperback edition. Ayoade argues for the canonisation of this brutal masterpiece a film that celebrates capitalism in all its victimless glory; one we might imagine Donald Trump himself half-watching on his private jet’s gold-plated flat screen while his other puffy eye scans the cabin for fresh young prey. 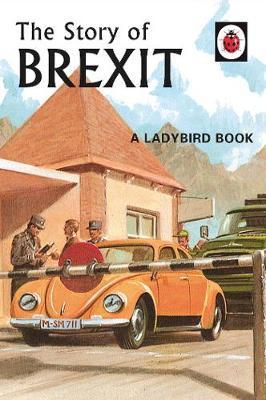 You're viewing: The Story of Brexit by Jason Hazeley £7.99
Add to basket