The Land of Neverendings by Kate Saunders

As hilarious as it is heartbreaking, another future classic from Costa Winner Kate Saunders (Five Children on the Western Front).

Emily watched, in a trance of astonishment, as the bear opened the picnic basket, took out a tartan rug and spread it on Holly’s bed.
And then the penguin spoke.
Actually spoke.
‘What’s going on? This isn’t Pointed End!’
The bear said, ‘It looks like a human bedroom. We must’ve come through the wrong door.’
‘But there aren’t any doors to the hard world in Deep Smockeroon! And we don’t have a human bedroom any more. We’re in a box in the attic.’

What if there exists a world powered by imagination?

A world of silliness, where humans and their toys live on long after they’ve left the Hard World . . . and what if the door between that world and this one was broken?

Welcome to the Land of Neverendings.

Moving, raw and funny in all the right ways, The Land of Neverendings is a rip-roaring adventure, but it also gives an honest portrayal of grief for young readers, and shows us that whilst sadness does exist in the world, it doesn’t have to cancel out happiness, or silliness, even when you lose someone you love.

‘This is written from the heart and can’t fail to make yours sing.’ The Times

‘A beautiful and often very funny book about imagination, family and love.’ BookTrust 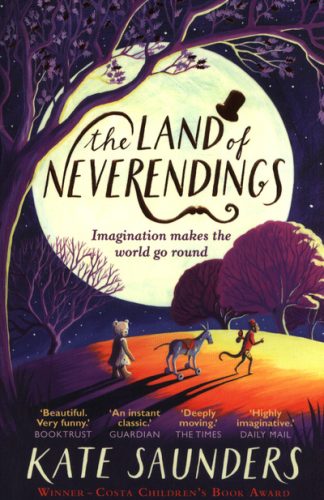 You're viewing: The Land of Neverendings by Kate Saunders £7.99
Add to basket