A spaceship from Earth accidentally crossed through a hole in space-time to a universe where the force of gravity is one billion times as strong as the gravity we know. Somehow the crew survived, aided by the fact that they emerged into a cloud of gas surrounding a black hole, which provided a breathable atmosphere. 500 years later, their descendants still struggle for existence, divided into two main groups. The Miners live on the Belt, a ramshackle ring of dwellings orbiting the core of a dead star, which they excavate for raw materials. These can be traded for food from the Raft, a structure built from the wreckage of the ship, on which a small group of scientists preserve the ancient knowledge which makes survival possible. Rees is a Miner whose curiosity about his world makes him stow away on a flying tree – just one of the many strange local lifeforms – carrying trade between the Belt and the Raft. 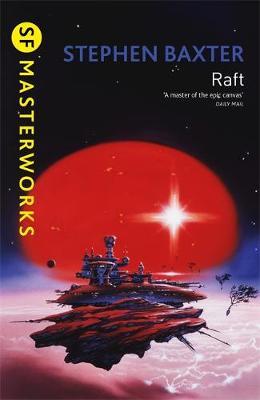 You're viewing: Raft by Stephen Baxter £9.99
Add to basket