A groundbreaking account of the effects of everyday racism on the identity and mental health of black British men, explored through the lens of Homeland and Supergirl actor David Harewood’s personal experience.

‘As a Black British man I believe it is vital that I tell this story. It may be just one account from the perspective of a person of colour who has experienced this system, but it may be enough to potentially change an opinion or, more importantly, stop someone else from spinning completely out of control.’ – David Harewood

When David Harewood was twenty-three, his acting career beginning to take flight, he had what he now understands to be a psychotic breakdown and ended up being sectioned under the Mental Health Act. He was physically restrained by six police officers, sedated, then hospitalised and transferred to a locked ward. Only now, thirty years later, has he been able to process what he went through.

What was it that caused this breakdown and how did David recover to become a successful and critically-acclaimed actor? In this raw and breathtakingly honest memoir, he investigates the extent to which his psychosis and subsequent treatment was rooted in race, racism and mental health stigma. Since making an award-winning documentary about his experiences for the BBC, David has delved into shocking statistics – such as how Black people four times more likely to be detained under the Mental Health Act than white people – and witnessed how sharing his experience has given him freedom to look at his entire life with new perspective.

Maybe I Don’t Belong Here is not only a powerful and provocative account of a life lived after psychosis, it is also a rallying cry to examine the systems and biases that continue to shape our society. 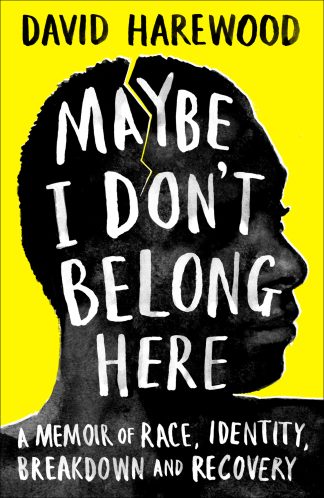 You're viewing: Maybe I Don’t Belong Here by David Harewood £20.00
Add to basket