Purchase of this bookclub ticket includes a copy of Kitchen which can be collected from the shop or posted out.

Join us on Zoom to discuss these two tales of mothers, transsexuality, bereavement, kitchens, love and tragedy in contemporary Japan.

The Zoom link will be emailed out to attendees the day before.

A startlingly original first work by Japan’s brightest young literary star and now a cult film. When Kitchen was first published in Japan in 1987 it won two of Japan’s most prestigious literary prizes, climbed its way to the top of the bestseller lists, then remained there for over a year and sold millions of copies. Banana Yoshimoto was hailed as a young writer of great talent and great passion whose work has quickly earned a place among the best of modern literature, and has been described as ‘the voice of young Japan’ by the Independent on Sunday.

‘The work of an original… Yoshimoto shows a brilliant, delicate discernment between the stages of the agonies of loss in these two moving novellas’ – Penelope Fitzgerald

‘A perfect jewel of a novel, delicious and comforting and pure’ – Lena Dunham

‘Yoshimoto’s writing is lucid, earnest and disarming, as emotionally observant as Jane Smiley’s, as fluently readable as Anne Tyler’s… at once familiar and bizarre’ – New York Times

‘Banana Yoshimoto is a master storyteller… The sensuality is subtle, masked, and extraordinarily powerful. The language is deceptively simple’ – Chicago Tribune

Purchase of this bookclub ticket includes a copy of Kitchen which can be collected from the shop or posted out. 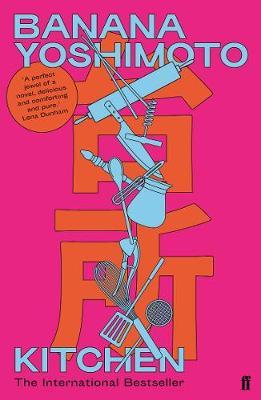