Julius Zebra: Grapple with the Greeks! by Gary Northfield

Demi-god Heracles promises Julius and his chums a great reward if they can help him to find the lost Golden Apple. On this madcap adventure, our unlikely heroes will confront the Minotaur in the labyrinth, trick a one hundred-headed dragon at the Garden of Hesperides and rescue Julius’s brother Brutus from the Underworld after he has been struck by King Midas’ Golden Touch. But what will the ever-watchful gods on Mount Olympus have to say about their antics? 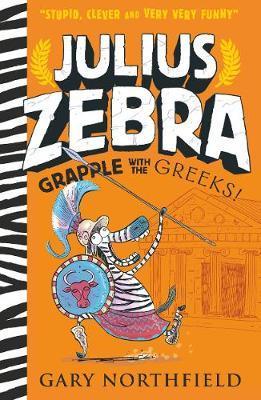 You're viewing: Julius Zebra: Grapple with the Greeks! by Gary Northfield £6.99
Add to basket
Join the waiting list We will inform you when the product arrives in stock. Please leave your valid email address below.