Journeys in the Wild: The Secret Life of a Cameraman by Gavin Thurston

From Gavin Thurston, the award-winning cameraman, with a foreword by Sir David Attenborough, comes extraordinary and adventurous true stories of what it takes to track down and film our planet’s most captivating creatures. Gavin has been a wildlife photographer for over thirty years. Against a backdrop of modern world history, he’s lurked in the shadows of some of the world’s remotest places in order to capture footage of the animal kingdom’s finest: prides of lions, silverback gorillas, capuchin monkeys, brown bears, grey whales, penguins, mosquitoes – you name it he’s filmed it. From journeys to the deepest depths of the Antarctic Ocean and the wide expanse of the Saharan deserts, to the peaks of the Himalayas and the wild forests of the Congo, Gavin’s experiences describe much more than just the incredible array of animals he’s filmed. 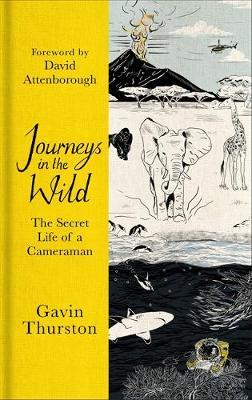 You're viewing: Journeys in the Wild: The Secret Life of a Cameraman by Gavin Thurston £16.99
Add to basket
Join the waiting list We will inform you when the product arrives in stock. Please leave your valid email address below.