Guard your Heart by Sue Diven

This book was not only a delight to read but a purposeful journey through finding oneself through adolescence. Aidan and Iona’s relationship is an amazing story on it’s own but add the tension of both their personal lives, history of ‘The Troubles’, and what the future holds, you get a phenomenal book. Rating: 4.5/5. By: Zara (age 14)

READ ZARA’S BRILLIANT ESSAY ON ‘GUARD YOUR HEART’ BELOW!

Boy meets girl on the Northern Irish border – but what if peace is harder than war?

Guard Your Heart – Review by Zara

There are multiple aspects of ‘Guard your Heart’ that I want to review. Unfortunately, there isn’t enough room on my review card to do that, so I will do it separately.

The first, is the explicit story of Aidan and Iona’s journey in a divided world. Sue Divin created her own version of Romeo and Juliet, however this time it was set in Derry, Northern Ireland, not in Verona, Italy – and they had a much better ending. Their story is one of finding yourself by discovering someone who makes you shine. It is made very obvious that falling in love with Iona changed Aidan in a very, very good way. After losing both parents and struggling to come to terms with who he was and where he was, Aidan found the wrong way of dealing with his problems – drugs and alcohol. As their relationship grows and struggles, we see Aidan begin to think about returning to some of his past times because he can’t deal with what’s happening. However, his time with Iona has changed him and he sees that going back really isn’t an option. Aidan has really grown from who he was before he met Iona. Sue Dirvin made it very clear that Aidan changed but made it a bit less clear that Iona changed due to their time with Aidan. We learn that Iona was a very quiet and obedient daughter in a family where she wasn’t really being noticed. She got good grades, she had her goals in life and she  did what she was told. However, after meeting Aidan and falling in love, she realised that being obedient was good but she wasn’t stranding up for herself. After hearing Aidan’s story and seeing how he held himself with confidence, Iona builds her own self-esteem. She begins to stand up for herself in front of her parents and brothers, she makes her own decisions about who she will be. Through the ups and downs of living in a divided Northern Ireland with two very families, Sue Divin really explored, with great outcomes, the full potential of character development.

The second idea that comes to mind when reflecting back on ‘Guard your Heart’ is of the underlying story of prejudice and identity based on ancestry. Throughout the entire novel, we see people making rash and harsh judgements about Aidan and Iona and their relationship. At the very beginning of the book, we see the young men, Dylan and Luke, beat up Aidan just because they believed him to be Catholic. Further down the story we see older, more educated people make similar judgements, but don’t make their opinions as clear as beating someone until they lie bleeding on the ground. In multiple sections of the story we see that people’s reactions to Iona and Aidan’s relationship are ones you would not expect to hear in the 21st Century. Sean and John (Aidan and Iona’s elder brothers) instantly tell each of them to break off their relationship because they aren’t the same religion and because of who their fathers are. Sean tells Aidan that he shouldn’t be dating Iona because her father and brother are both cops. We know that Sean doesn’t like or trust the police because they are protestant for a start and because of their father’s past and his own present. A similar situation happens to Iona. As soon as both her father and eldest brother find out how new boyfriend is from the other side of Derry, their immediate reaction is pure anger that she could be dating someone Catholic. The other finding all that Aidan’s father was part of the IRA during the troubles, Iona’s father immediately bans the two 18 year olds from having anymore contact. In both occasions prejudiced decisions are made by other people based on who their parents are. If an 18 year old is an adult then they have the freedom to make their own decisions. Not only that, but a person should not be judged by their skin colour, religion or their home, beliefs and most definitely not the actions that their parents took. They should be judged by who they are as an individual.

Finally, the third thing that comes to mind is the history of religion and the troubles in particular. Sue Dirvin mentions multiple events that occurred during the troubles throughout her book, such as Bloody Sunday and Good Friday. As an English citizen, I don’t, personally, know very much about the troubles, but this book has sparked an interest in me and makes me want to research and learn more about this important part of Great Britain’s history. The troubles ended in 1988, however we see that the history of Ireland has had a long lasting affect on its people. Although peace had been declared and a national apology was made these are still harsh opinions that haven’t evolved over time in Aidan and Iona’s story we see that both sides are as bad as each other when thinking about “them” and “us”. Physical conflict with guns and violence had ended decades ago however, Sue Divin implies that there is still a very apparent divide between the two religions and that the fight hasn’t finished quite yet. Here the author is trying to teach readers a lesson about how history effects our modern world. Just because peace was declared decades ago or a monarch passed away centuries ago doesn’t mean that the issues that were brought to light during these times has disappeared. There is a lot to learn from our world’s history, in order for us to make sure that it changes for the better.

I thoroughly enjoyed reading ‘Guard your Heart’ and I look forward to reading more of Sue Divin’s work and researching more about the troubles. 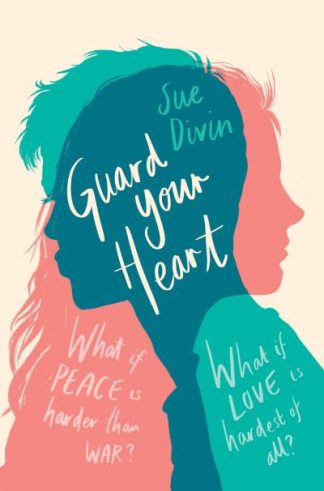 You're viewing: Guard your Heart by Sue Diven £7.99
Add to basket