God Save Texas: A Journey into the Future of America by Lawrence Wright

A New York Times Notable Book of 2018
‘This is a funny, pointed love letter to Texas, at once elegiac and clear-eyed’ Ben Macintyre, The Times

From the Pulitzer Prize-winning author of The Looming Tower, God Save Texas is a journey through the most controversial state in America.

Texas is a Republican state in the heart of Trumpland that hasn’t elected a Democrat to a statewide office in more than twenty years; but it is also a state in which minorities already form a majority (including the largest number of Muslim adherents in the United States). The cities are Democrat and among the most diverse in the nation. Oil is still king but Texas now leads California in technology exports and has an economy only somewhat smaller than Australia’s.

Lawrence Wright has written an enchanting book about what is often seen as an unenchanting place. Having spent most of his life there, while remaining deeply aware of its oddities, Wright is as charmed by Texan foibles and landscapes as he is appalled by its politics and brutality. With its economic model of low taxes and minimal regulation producing both extraordinary growth and striking income disparities, Texas, Wright shows, looks a lot like the America that Donald Trump wants to create.

This profound portrait of the state, completed just as Texas battled to rebuild after the devastating storms of summer 2017, not only reflects the United States back as it is, but as it was and as it might be. As much the home of Roy Orbison and Willie Nelson as of J.R., Ross Perot and the Bush family, as filled with magical scenery as with desolate oil-fields and strip-malls, Texas is a bellwether, super-sized mass of contradictions: a life-long study. 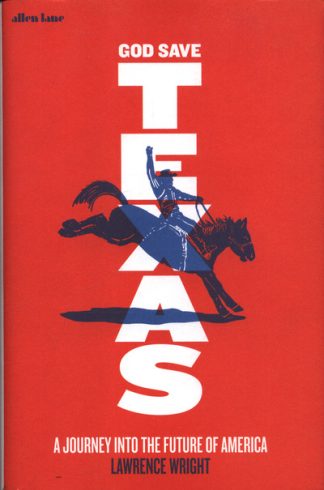 You're viewing: God Save Texas: A Journey into the Future of America by Lawrence Wright £20.00
Add to basket