Frostquake: The frozen winter of 1962 and how Britain emerged a different countr by Juliet Nicolson

On Boxing Day 1962, when Juliet Nicolson was eight years old, the snow began to fall. It did not stop for ten weeks. It was one of the coldest and harshest winters for 300 years. The drifts in East Sussex reached twenty-three feet. In London, milkmen made deliveries on skis. On Dartmoor 2,000 ponies were buried in the snow, and foxes ate sheep alive. It wasn’t just the weather that was bad. The threat of nuclear war had reached its terrifying height with the recent Cuban Missile Crisis. Unemployment was on the rise, de Gaulle was blocking Britain from joining the European Economic Community, Winston Churchill, still the symbol of Great Britishness, was fading. These shadows hung over a country paralysed by frozen heating oil, burst pipes and power cuts which are explored here. 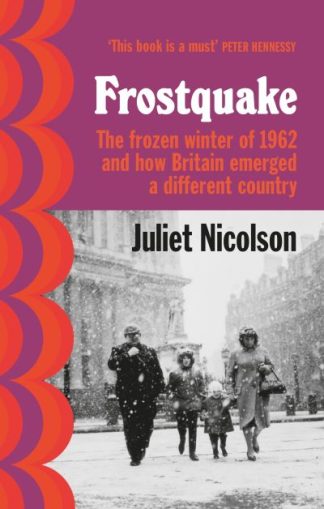 You're viewing: Frostquake: The frozen winter of 1962 and how Britain emerged a different countr by Juliet Nicolson £18.99
Add to basket