Edith Cavell was born on 4th December 1865 daughter of the vicar of Swardeston in Norfolk and shot in Brussels on 12th October 1915 by the Germans for sheltering British and French soldiers and helping them escape over the Belgian border. Following a traditional village childhood in 19th-century England Edith worked as a governess in the UK and abroad before training as a nurse in London in 1895. To Edith nursing was a duty a vocation but above all a service. By 1907 she had travelled most of Europe and become matron of her own hospital in Belgium where under her leadership a ramshackle hospital with few staff and little organization became a model nursing school. When war broke out Edith helped soldiers to escape the war by giving them jobs in her hospital finding clothing and organizing safe passage into Holland. In all she assisted over two hundred men. When her secret work was discovered Edith was put on trial and sentenced to death by firing squad. She uttered only 130 words in her defence. A devout Christian the evening before her death she asked to be remembered as a nurse not a hero or a martyr and prayed to be fit for heaven. When news of Edith’s death reached Britain army recruitment doubled. After the war Edith’s body was returned to the UK by train and every station through which the coffin passed was crowded with mourners. Diana Souhami brings one of the Great War’s finest heroes to life in this biography of a hardworking courageous and independent woman. 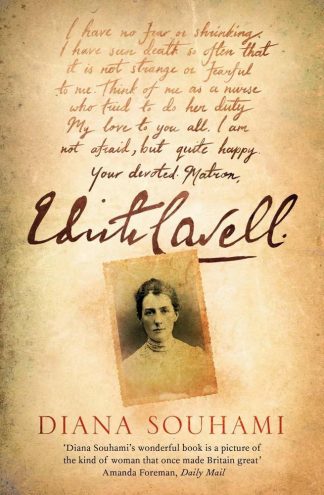