THEY CALL IT THE CITY OF A HUNDRED ROWS.

The ancient city of Thaiburley is a vast, multi-tiered metropolis, where the poor live in the City Below, and Demons are said to dwell in the Upper Heights.

The street-nick Tom must find the source of the great river Thair and perhaps learn the secret of his own strange powers?

The assassin Dewar must redeem himself?

The Prime Master desperately seeks the cure for bone flu – a mysterious and deadly malady that is striking down the talented in Thaiburley’s highest Rows?

Kat, the renegade nick, forms an uneasy alliance with her sister Charveve, and the two lead the Tattooed Men through the dark streets of the City Below in search of the Soul Thief: the evil monster that murdered their mother and consigned both girls to the gladitorial hellhole known as the Pits?

Welcome back to Thaiburley, the City of 100 Rows, the City of Dreams? where the nightmare has only just begun? 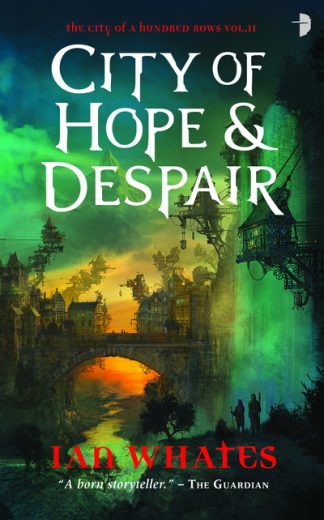 You're viewing: City Of Hope & Despair by Ian Whates £7.99
Add to basket