Every student needs a part-time job. Hers is hunting criminals. Sarie Holland is a good kid. An Honours student. She doesn’t even drink. So when a narcotics cop busts her while she’s doing a favour for a friend, she has a lot to lose. Desperate to avoid destroying her future, she agrees to become a CI – a confidential informant. Armed only with a notebook, she turns out to be as good at catching criminals as she is at passing tests. But it’s going to take more than one 19-year-old to clean up Philadelphia. Soon Sarie is caught in the middle of a power struggle between corrupt cops and warring gangs, with nothing on her side but stubbornness and smarts. Which is bad news for both the police and the underworld. Because when it comes to payback, CI `137 turns out to be a very fast learner. 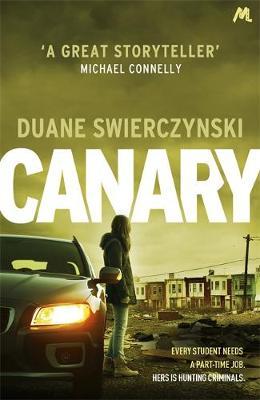 You're viewing: Canary by Duane Swierczynski £8.99
Add to basket
Join the waiting list We will inform you when the product arrives in stock. Please leave your valid email address below.