Buildings of New York is the second monograph by artist and architect Roger FitzGerald, which follows on from Buildings of London, 2016. Turning his attention to the landscape of New York, FitzGerald brings his unique painting style to the continually evolving cityscape. Included within the book are entirely unique portrayals of some of the city?s most iconic achitectural landmarks. Individual structures, such as Grand Central Station, the Solomon R Guggenheim Museum and the many bridges, all sit alongside gentle and considered paintings of brownstone townhouses, views of the surrounding boroughs, as well as dramatic views of Central Park. Each image is accompanied by short, personal comments by the artist and this is what makes this book an inspiring guide to New York as well as an ideally priced gift buy.

FitzGerald?s painting style combines colour, texture and collage to capture the essence of places. He frequently portrays buildings as an architectural ?stage-set?: a permanent, calm and static backdrop to the vibrancy of everyday life. This contrast is exploited, with cool architectural colours being offset by vivid warm tones and elements of collage which represent the life and bustle generated by moving people and vehicles. Tickets, menus, maps, books, newspapers and a host of other paraphernalia are incorporated into the images, adding additional meaning and complexity. 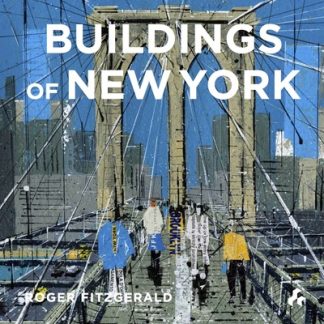 You're viewing: Buildings of New York (CR18) by Roger FitzGerald £12.95
Add to basket