Before She Knew Him by Peter Swanson

When Hen and Lloyd move into their new house in West Dartford, Mass., they’re relieved to meet, at their first block party, the only other seemingly-childless couple in their neighbourhood, Matthew and Mira Dolamore. Turns out they live in the Dutch Colonial immediately next door. When they’re invited over for dinner, however, things take a sinister turn when Hen thinks she sees something suspicious in Matthew’s study. Could this charming, mild-mannered College Professor really be hiding a dark secret, one that only Hen, whose been battling her own problems with depression and medication, could know about? Lloyd certainly doesn’t seem to believe her, and so, forced together, Hen and Matthew start to form an unlikely bond. But who, if anyone, is really in danger? 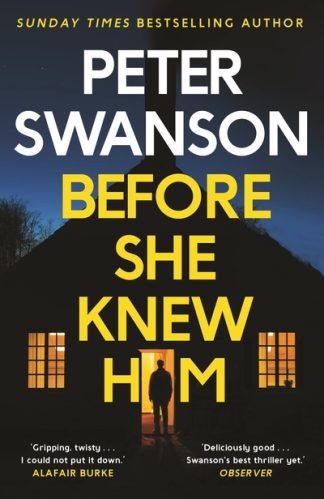 You're viewing: Before She Knew Him by Peter Swanson £8.99
Add to basket