Appeasing Hitler: Chamberlain, Churchill and the Road to War by Tim Bouverie

On a wet afternoon in September 1938, Neville Chamberlain stepped off an aeroplane and announced that his visit to Hitler had averted the greatest crisis in recent memory. It was, he later assured the crowd in Downing Street, ‘peace for our time’. Within a year of the British prime minister’s return from Munich, Germany invaded Poland and the Second World War began. That moment of theatre was the culmination of over five years of drama. Beginning with the advent of Hitler in 1933, Tim Bouverie takes us on a fascinating journey from the early days of the Third Reich to the beaches of Dunkirk. We enter the 10 Downing Street of Stanley Baldwin and Chamberlain, and the backrooms of Parliament where an unusual coalition of MPs – including the indomitable Winston Churchill – were among the few to realise that the only real choice was between ‘war now or war later’. 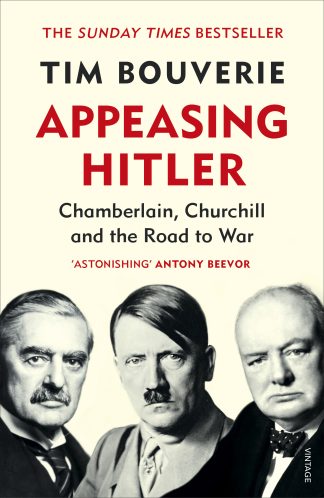 You're viewing: Appeasing Hitler: Chamberlain, Churchill and the Road to War by Tim Bouverie £9.99
Add to basket
Join the waiting list We will inform you when the product arrives in stock. Please leave your valid email address below.